Last year I attended my very first vending event.  It was a small Fairy Festival held at a shop named AvalonBeyond in Orlando, FL.  If you are local to the area you can find it at 1211 Hillcrest St. Orlando FL 32803.
Posted by Magical Oddities 2 comments:

Dragon Con 2011.  Wow, the costumes get better every year.  The attendees and artists were incredible.  The panels -- well, this year I was blown away by the amount of invaluable content and the knowledgeable, friendly people that provided it.  For someone who has a plethora of impossible ideas, there was a buffet of technology, materials, and techniques to create the impossible.

My hands down favorite panel was "Electronics and Animation" presented by the Costuming track.  The description for the track read "Smoke, sound, lights, cooling, heating, and moving parts- add them to your costume effectively and safely with expert advice from our panelists."  When you walked into the room it was a jarring setup.  There were presenters in all four corners of the room and the seats were arranged from the center of the room facing each of the four corners.  Once the confusion went away, you chose which presenter you most wanted to hear and took a seat.  Logistically it was weird.  There were no microphones which made it difficult to hear, and the presenters had to address people from a range of directions which made it hard to see.  However, the content was GREAT!  So, despite the awkwardness of the setup, this panel really shone, and you could tell the attendees were really excited about everything they learned in the hour.  It was definitely one of the highlights of the whole convention for me (I also have to say that the costuming track really outdid themselves.  I couldn't make it to all the panels, but the ones I did attend were so informative and friendly.  I am going to make the costuming track a sure priority at next year's con!  http://costuming.dragoncon.org  Great job Costuming Track!  Check them out on their Facebook page: http://www.facebook.com/groups/282691676228/)

I walked into the "Electronics and Animation" panel and the closest presentation caught my eye first.  There were embroidery hoops with flashing lights sewn into the fabric . . . "What is THAT!?! because it looks awesome!" was my first thought.  I immediately took a seat and thank goodness I did.  Lighting for my faeries has been a major goal for Magical Oddities from the beginning.  I've wanted a faerie that looks as real as possible, and that includes a tiny glowing body.  I've looked into LEDs and wiring, but when you google "small LED" you don't exactly get a short list.  There's  a local store here in Orlando: Skycraft Parts & Surplus, Inc. (http://www.skycraftsurplus.com) which sells a variety of switches and LEDs, but the parts are piecemeal and my plans for Magical Oddities require having components that will be available long-term.  Skycraft is an awesome store, but they don't always have the same components, and I haven't seen LEDs that are tiny enough to create realistic faeries.  I haven't had much success in narrowing the field of LEDs and switches to a particular company or type, the internet is just too big, and until now I didn't know where to start.

Anyway, the presenter was a rep from Sparkfun Electronics, named Dia (she was super nice!).  She's their "Techstyle Specialist," and I recommend the video below where she presents some of their product.  If you are interested in incorporating lights into your fabric costume . . . you need to check out these products!!!!  She showcased their line of Lilypad E-Textiles products.  These allow you to sew electrical components into fabric.  They sell conductive thread.  Yes, I said conductive thread!!!  You literally sew an LED onto your fabric, and rather than "wire" it to a power source you "stitch" it to a power source.  They also have tiny switches and buttons which can be sewn into your circuit.  All of these components create a circuit that is as flexible as your fabric!  There is very little bulk or weight.

While the possibilities this opens up for costuming with LEDs are incredible, I don't really create costumes myself (yet!).  I was most excited about the incredibly tiny LEDs and switches that I didn't know were available ~ and they can be hidden into fabric elements!  I've already started making faerie hair clips and pins, but they would be even cooler if they lit up!  I created a new style of faerie hair clip just for Dragon Con and I mean to do another blog post about how that went.  I wore them around on a hat for practically the entire convention.  Now if I incorporate these tiny lights . . . oh I can't wait!! This panel was incredibly exciting for Magical Oddities! At one point the rep saw the tiny faeries on my hat and mentioned "You know, we make tiny vibration motors that could make those wings flutter." WHaaaat?! That has been a scheme in the back of my head for a long time, and now I have an invaluable resource to help me get there faster.

I've kept the focus of this blog post to the simplest use of the Lilypad products: LED, switch, & battery which are important to me because of their size.  However, the real promise for costuming is the Lilypad Arduino board.  I am just learning about Arduino boards so I won't even attempt to explain them fully.  They are basically easily programmable boards that will tell your LEDs or other elements what to do.  What I WILL show you is what someone with advanced Arduino board knowledge can create.  The person in the video below was one of the panelists from the Dragon Con Robotics track's "Arduino" panel.  I'm hoping to do a blog post about this panel as well, but no promises - it was all a little over my head :)  Anyway, his suit was the talk of the Dragon Con Dance Party and the Last Party on Alderaan (lol).  I end this post with the awesome visuals and potential of Arduino boards incorporated into costumes!  Check it out!!! 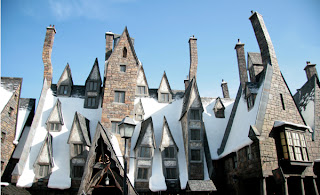 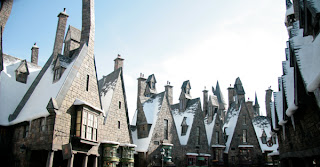 Now, I figured my first blog post should probably be all about Magical Oddities; what I've worked on and all the things Stefan and I have planned.  So, naturally I've been putting it off for a long time.  It just felt so weighted.  I was creating a mental checklist of things I had to write about in my first blog post.  Well, it's been put off too long!  I'm abandoning the responsibilities of my first blog post!!!!  Instead, I decided to share some fun pictures.  Stefan and I took a trip to Hogsmeade the other day, and it's such a cute village!  Stefan practiced his photography skills while I browsed the shops! We picked up some delicious cauldron cakes at Honeydukes, which were too much chocolate for me, so Stefan finished mine :) . . . he didn't mind. 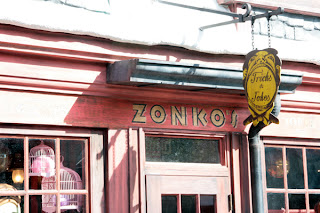 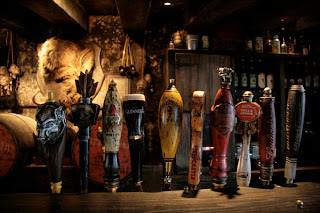 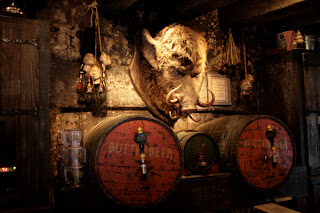 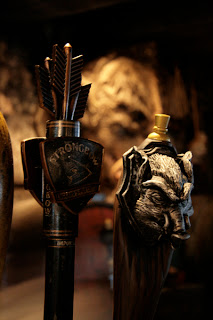 It was a pretty great day!  I think the pictures Stefan took are wonderful.  Now if only I could get pictures of my faeries that looked that good . . . 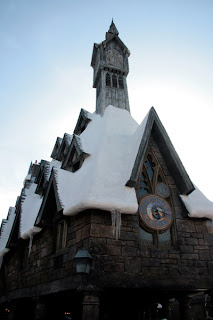 Magical Oddities
I'm Erin, I love fantasy, books, and movies! Magical Oddities is the latest endeavor that I have undertaken with my fiance, Stefan. We've put a lot of work into creating special creatures and hope to create many more unique oddities. To check out our shop of Magical Oddities on the handmade marketplace known as Etsy, visit magicaloddities.etsy.com. This blog is an outlet to talk about interests and the process behind creating Magical Oddities! 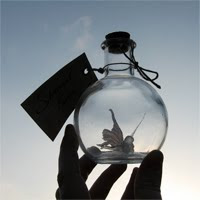 One of the first Faerie Bottles by Magical Oddities!